I’ve been tagged by my blogging friend Melynn at Breathing Easy. For those of you who aren’t fluent in bloglish, being “tagged” is a virtual game not unlike the childhood version, except that instead of getting cooties we have to reveal a number of things about ourselves. I probably would choose not to play (party pooper that I am) except that my mom recently told me that she’d been reading through my old blog entries and she was learning things about me that she didn’t know. Hmm. I’ve always considered myself a very private person. I used to hoard the bits and pieces of the inner me because I thought if I put them out there I could lose them. It’s like I imagined that they were these colorful helium balloons full of me instead of gas and if I gave them to people they might let them go and I’d never get them back. Does that sound weird? (Don’t answer that!) Writing the blog (and my 2 1/2 novels) has helped me understand that it’s okay to reveal yourself (a little) to the world. Perhaps I should say share yourself, fear not, there will be no revealing bookbabie sex tapes popping up on YouTube! So anyway, I’m going to play tag today in honor of my mom, however, I won’t follow all the rules (like Melynn, who by the way I think would be a best friend if she lived nearby). So here goes, seven random facts about the bookbabie, but you must promise me that you won’t let go of those strings…

1. I have a killer serve in volleyball and wallyball.

2. My first favorite “grown-up” book was My Antonia by Willa Cather

3. I watch Dancing with the Stars (so does Mr. bookbabie, but don’t tell him I told you!)

4. I wanted to have three children but got sick and struggled just to raise the two babies I was blessed with.

5. I felt most like “me” when I was standing in front of an easel painting.

6. I haven’t painted in about ten years:( 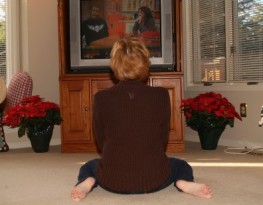 (but not for long and the getting up part isn’t pretty!)

5 thoughts on “bookbabie has cooties”